About Kismet
Kismet is a small community on Fire Island located across the Great South Bay opposite mainland at Bay Shore, NY. Kismet is a Hamlet of the Town of Islip. It is Fire Island’s most westerly community bordering the Fire Island National Seashore Lighthouse Tract directly overlooking the famed Fire Island Lighthouse.

Real Estate
Kismet has 256 private residences, which include primarily single family homes and two multiple dwelling structures. There are no transient accommodations in Kismet. There is a small “downtown” bay front commercial district including the ferry dock, restaurants, a boat marina, a few stores and the Kismet Fire House. Development of Kismet began in 1925 when the Kismet Park Corporation, owned by Frederick Weis, built two streets bay-to-ocean. Thereafter, the hurricane of 1938 and then World War II curtailed further development in Kismet until the 1950’s and 1960’s, during which time three more bay-to-ocean streets were added for a total of five streets, known as “walks”. Kismet has a small public park with a children’s play area and two public tennis courts. 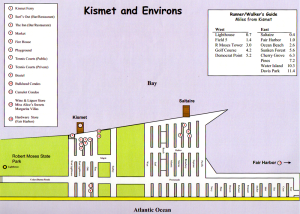 Distance from New York City
About 47 miles by car to the ferry dock in Bay Shore, NY, and six miles across the water by ferry to Kismet.

How to Get Here

Train
By Long Island Rail Road from Penn Station, it takes about 80 minutes to Bay Shore. Trains leave Penn Station frequently for Bay Shore, with connections at either Babylon or Jamaica. Vans meet the trains for the four-minute ride to the ferry docks and charge $4, or people can walk the one-mile distance through Bay Shore in about 15 minutes.

Car
The drive takes about one hour and 20 minutes from Manhattan to the ferry dock. Take the Long Island Expressway East to Exit 53, then the Sagtikos State Parkway South to the Southern State Parkway East. Turn off at Exit 42 South and follow signs through Bay Shore to the ferry. The ferry dock has overnight parking, but it’s often full on weekends between Memorial and Labor Day.

Ferry
It’s a 25-minute ferry ride from Bay Shore to Kismet and ferries run about every 90 minutes or longer.

The FI Ferries also handle freight. Check their website or call for details. 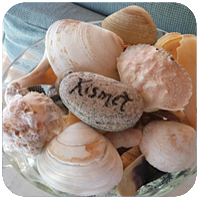 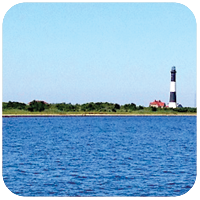